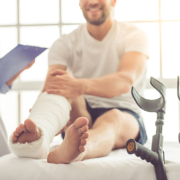 5 of our clients are currently receiving payments totalling $36,533 per month from Income Protection policies set up by Sarina Insurance and Financial Services.

As soon as the claim forms are completed and the first payment arrives, people soon forget about the cost of the premiums and realise the benefits.

Income protection pays a replacement wage if you are unable to work due to accident or illness, payments can continue until age 65.

Premiums are tax deductible and may be cheaper than you think. 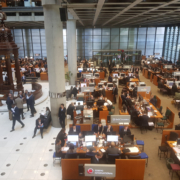 Broker principals Rick and Barb travelled to London recently and were invited to tour the Lloyds insurance building in the centre of the financial district as guests of Myles Smith insurance brokers, based at Lloyd’s.

Lloyd’s commenced in 1686 at Edward Lloyd’s coffee shop, initially selling marine insurance and has grown to become the world powerhouse of insurance. Lloyd’s are used daily by Sarina Insurance to place the more unusual or hazardous risks that Australian insurers will not entertain.

Below is a photo of Rick and Barb standing with the Lutine bell, hung in the centre of the trading floor. This was salvaged in 1857 after HMS Lutine was lost in 1799. It’s rumoured that the ship also carried the Dutch crown jewels, en route from repair in London. It was Lloyd‘s underwriters who insured the Lutine‘s highly valuable cargo. Read more about HMS Lutine here. 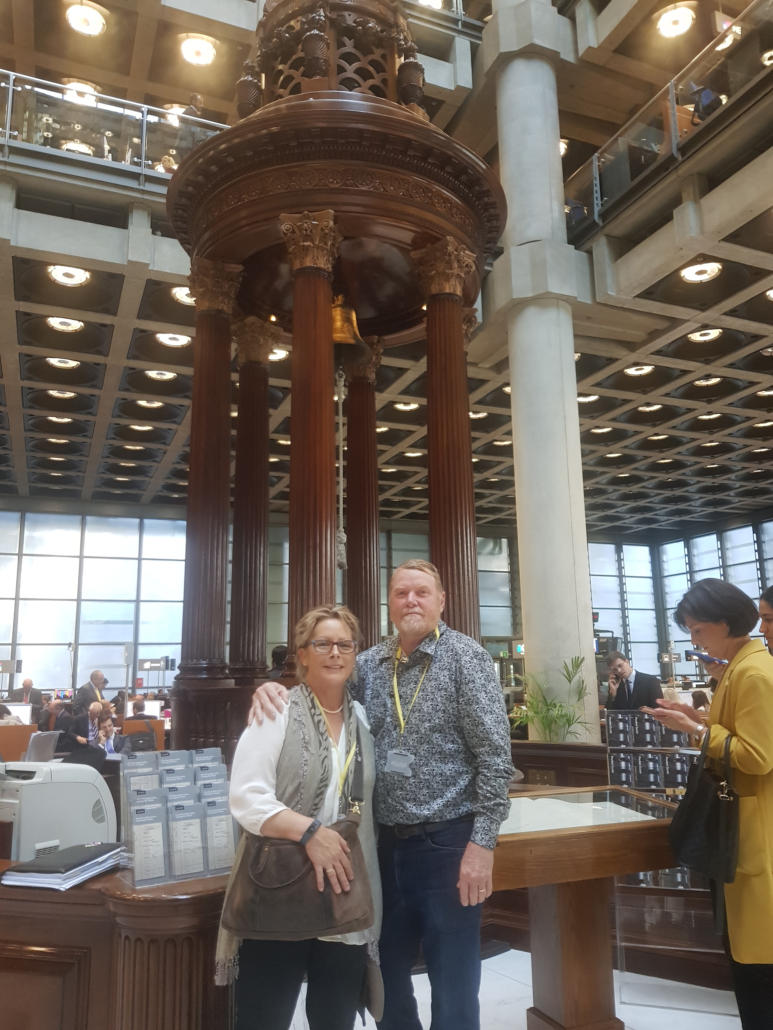 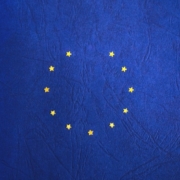 The EY report says companies including insurers have spent £1.3 billion ($2.36 billion) on relocation costs, legal advice and contingency plans, and £2.6 billion ($4.72 billion) on capital to enlarge headquarters outside the UK.

Dublin has proven the most popular city for relocations, with 29 companies moving there, while the number choosing Luxembourg has risen to 23 in the past three months. Frankfurt has attracted 22.

Nearly £1 trillion ($1.82 trillion) of assets and 7000 jobs will move to Europe, which has remained unchanged in recent months. Companies paused Brexit planning between March and May as Parliament negotiated an extension to the withdrawal deadline.

EY UK Financial Services Leader Omar Ali says the final sums are likely to be much larger, because only a few businesses have put a figure on potential costs. The number of companies that have confirmed they will quit Britain has risen slightly to 91 out of 222 studied.

“Given the tight timeframes and many unknowns, lots of financial service firms have prepared for a ‘no-deal’ scenario with temporary contingency plans, which are often inefficient and costly,” Mr Ali said. “A more sustainable approach will need to follow once the long-term level of UK-EU market access becomes clearer.”

This is an insurance news article 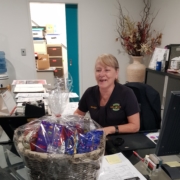 We celebrated Marilyn’s birthday yesterday, many happy returns from all.

You would think the boss would have given her the day off!

Jacqui started in insurance in 2009 and completed her Tier 2 certificate in insurance broking in 2010 and Tier 1 in 2013 while working in a Mackay Broking Office. After taking some time off in 2014 to have a family, Jacqui has recently started work with the Team at Sarina Insurance.

Jacqui has a domestic insurance background as well as commercial business knowledge and enjoys the challenges of helping clients with their insurance needs and assisting with any claims that arise. She looks forward to expanding her knowledge in the insurance industry with an emphasis on commercial and farm insurance.

Jacqui enjoys spending time with her family, health and fitness, outdoors and cooking for family and friends. 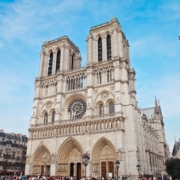 The French Government will be footing the bill for rebuilding Notre-Dame de Paris as the cathedral is state-owned and has no private insurance cover against fire and other catastrophes.

But Axa, the country’s biggest insurer, is possibly facing huge claims as it provided insurance for some historical items that were housed in the Paris cathedral.

Additionally, two of the construction firms that were carrying out restoration works before the fire broke out on Monday had taken out civil liability policies with Axa. French investigators say there is no evidence to suggest the fire was arson.

While the proximate cause of the fire has not yet been established, similar fires have taken place during restoration projects.

At least €700 million ($1.1 billion) in private donations has been promised to support the rebuilding effort, with some of France’s wealthiest families and major companies digging deep to contribute. Axa is donating €10 million ($15.7 million) to the fundraising campaign.

President Emmanuel Macron says an international fundraising drive will be launched to finance the reconstruction effort, which he expects will take five years.

Fire and emergency crews managed to save a number of artworks and the sacred Crown of Thorns, purportedly a relic of the crown placed on the head of Jesus before his crucifixion.

A Swiss Re spokesman told insuranceNEWS.com.au works of art and relics are typically not insured because they are often priceless.

“Our insurance scheme covers, among other things, damage to the Opera House caused by fire and natural disasters such as severe storms, and is supported by an extensive reinsurance program in commercial markets, both locally and internationally,” an icare spokesman told insuranceNEWS.com.au.

“icare insures government assets across NSW valued at more than $193 billion, including everyday infrastructure like bridges, schools and hospitals.” 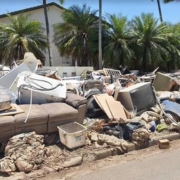 IAL covers the majority of our client’s homes, and recently, their head of claims, Stuart took a trip up to Townsville. To visit some of the flood victims, and to see the damage first hand. This is what he had to say:

There really aren’t words to describe what it is like to see streets and streets of people’s entire lives out on the front yard with everyone helping the clean out – the army, SES, neighbours, locals. A mix of devastation and anyone and everyone helping people in 40-degree heat.  The photo above is typical of the entire suburbs that I saw.  Just devastating.

Tough to see and I cannot imagine what this would be like if this happened to my family.  You can certainly get an idea of it via tv and photos, but seeing it live gives it a stark reality that kicks you in the guts.

Here’s a photo of the watermark on one of the properties of how high it got that I saw: 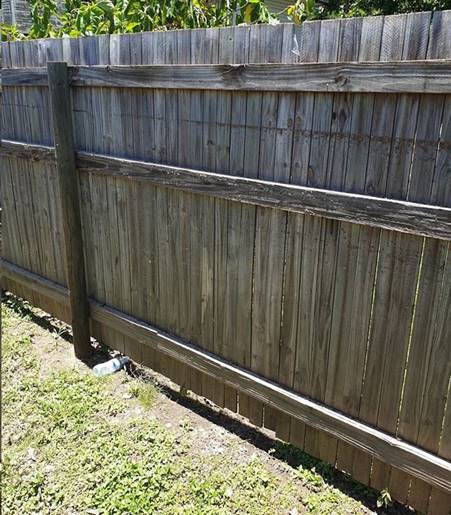 I spent Tuesday with a number of brokers who had policies and claims with IAL.  There were zero hire cars available in all of Townsville so a broker (Steve Brown who seemed to know every single person in Townsville) was able to drive me around all of Tuesday.

I spent about 3 hours being driven around Townsville in some of the worst affected areas meeting some army personnel, SES people (one SES guy was at least 110 years old!) and some insured’s who were cleaning up their properties.  There was one property where the guy had refused to go back to his place because he was in denial that it happened.  His neighbour who was a builder had been cleaning his place and stripping it out for him.

Wednesday I spent all day with a couple of the guys from Claim Central – Travis and James.  I met with them and we discussed where we were at with our response.  You guys want local trades to do a lot of CAT work as it is good for the town.  It was great then to know that Claim Central have put on three local builders and all local tradies.  This is fantastic as it means it all stays within Townsville.  Also these providers are only doing work for Claim Central so they won’t be pushed and pulled by other insurers to do some of their work.

We then visited one of the IAL claims where they were doing a ‘strip out’.  For those that don’t have an idea of how this works (me) it goes like this:  the ‘strip out’ is basically getting a whole bunch of people to remove everything below a certain point e.g. 1.2 metres or higher if the watermark is higher.  And that means everything.  Then after that, it is the dry out of everything and then finally the scope and start the fixing.  For obvious reasons, you want to strip out as soon as possible to stop more damage from mould and wetness.

Here’s what it looks like from the property we saw on Wednesday: 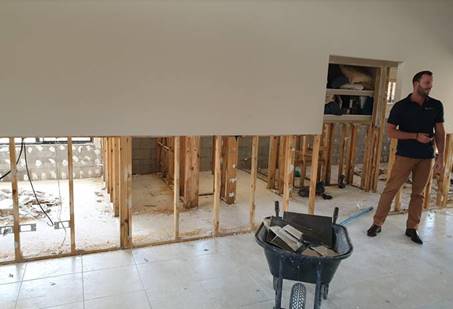 I then found out that out of all of the houses in that suburb we were the only insurer who had started this process.  Neighbours were saying they will switch to IAL after seeing how responsive we were.   That was very nice and humbling to hear.

Mind you, this strip out process started at 7am and in 40 degree heat with no air conditioning and takes until about 2pm.

It is easy to get cynical about insurance and there are already reports on social media about things that just aren’t true about what insurers do in these circumstances.

The value of visiting Townsville and seeing it first hand and meeting brokers and insured’s was great. People have been devastated and suffering a lot of shock and to help them quickly is what we need to do as an insurer.

Happy New Year! We hope everyone had a safe and happy holiday break. Hopefully, no one experienced events like those in these short clips.

Our trainee broker Mikaylah turned 19 today, the cake was her favourite, choc mint. Being taken out tonight by the family for a big dinner. 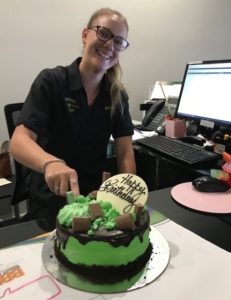 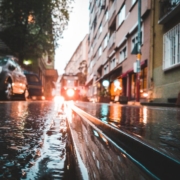 This year is shaping up to be one of the worst in terms of catastrophe losses the insurance industry has ever incurred, as data for the third quarter of 2018 paints a grim picture.

During Q3 2018, the US was beset by the destructive Hurricanes Florence and Michael, which together caused more than $31 billion in economic damages. The quarter also saw wildfires erupt in some parts of the country. California – in particular – continues to suffer its worst fire season on state record, having experienced 32 wildfires in Q3 2018 alone.

In Asia, meanwhile, Typhoons Jebi and Trami devastated Japan, while Southeast Asia had to deal with Typhoon Mangkhut.

“This has been a year in which the frequency of catastrophes seems potentially larger than last year,” RMS meteorologist and event response manager Tom Sabbatelli told The Financial Times.

The Financial Times analysed third-quarter filings from over 20 of the world’s major insurers and found that the companies have recorded losses of about $9.1 billion.

RMS is anticipating up to $20 billion of combined insured losses from Hurricanes Florence, Michael and Jebi alone.

These loss projections make 2018 one of the worst years in the past decade for natural catastrophes.

“[2018] is an above-average year. It is a reminder to the market that we shouldn’t expect a return to [the low level of natural catastrophes] in 2015 and 2016,” explained Jefferies analyst Philip Kett.

Of the many insurers affected by third quarter losses, AIG is expecting the biggest hit. In an earlier release, the company projected pre-tax catastrophe losses for the third quarter at around $1.5 billion to $1.7 billion.

This article was first published on insurancebusinessmag